LogDevice servers (nodes running the logdeviced process) have either a storage or a sequencer role, or both. Nodes acting as sequencers are in charge of assigning a monotonically increasing sequence number to each record in a log, and sending the record to a set of storage nodes. Nodes with the storage role are responsible for storing log records, and, at read time, delivering log records to readers.

Let's look at how an append request proceeds through the system from the client's perspective. 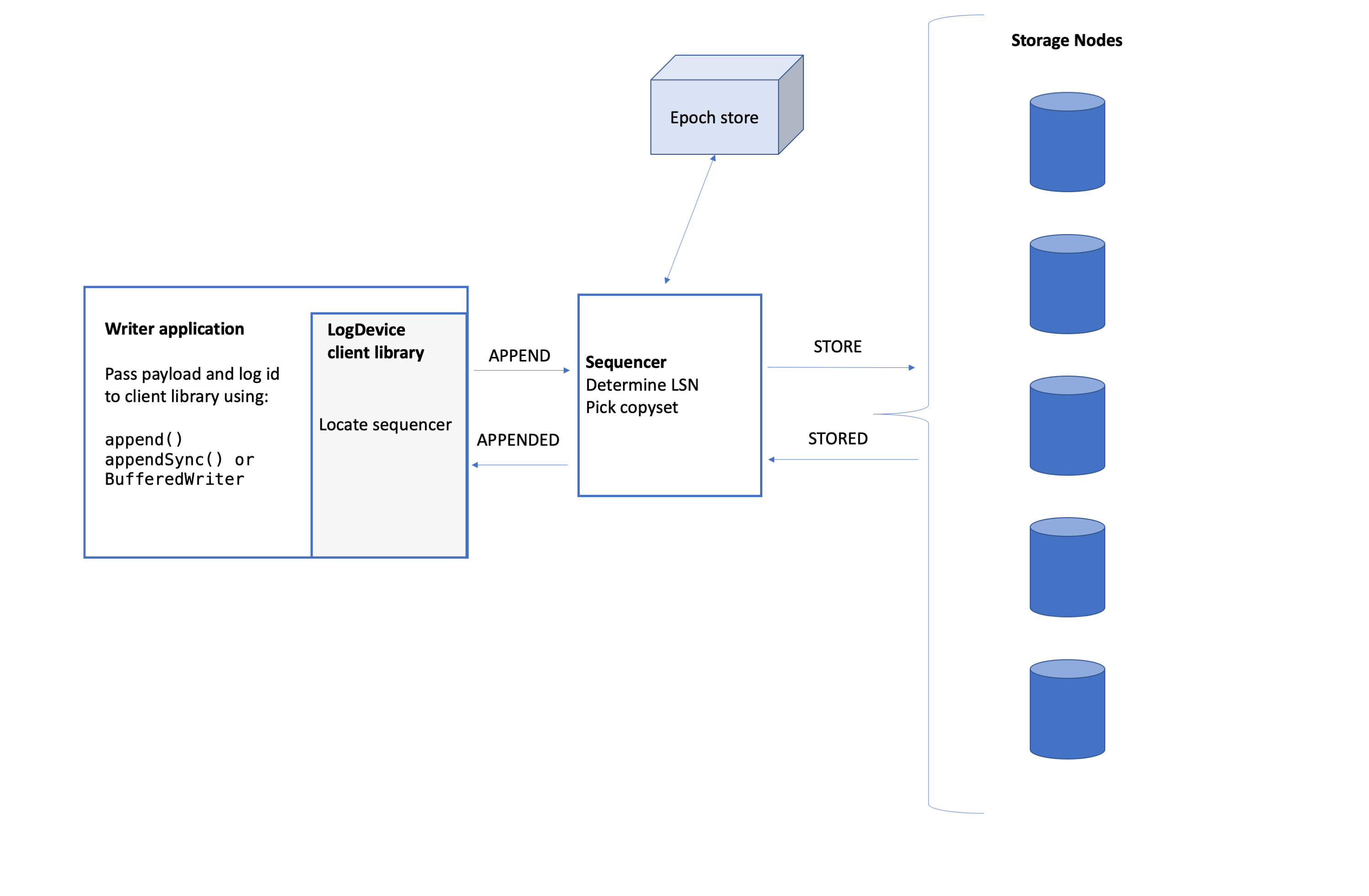 Within each application thread, the client sends each record for the same log to the sequencer in the order in which it was received.

The epoch configuration includes the replication property and the nodeset for the log. The nodeset is only allowed to change when the epoch does; any modifications to nodeset selection forces a sequencer re-activation.

A simplified view of the replication configuration

The sequencer creates and manages appender objects for replicating data records onto storage nodes. Let's look at an append from the perspective of the sequencer.

Appends are run in parallel with multiple records in-flight at the same time. Within the sequencer, there is a sliding window of appender objects, one for each record. When the oldest append is complete, the window moves along one position.

LogDevice supports out-of-order ACKs: a record is acked as soon as its appender finishes replication. But the sequencer won't slide the window until the record with the smallest LSN in the sliding window has been replicated and acked. If the oldest active appender cannot store its record and the window fills up, the sequencer returns a SEQNOBUF error to the clients to indicate that it cannot accept new APPENDs. 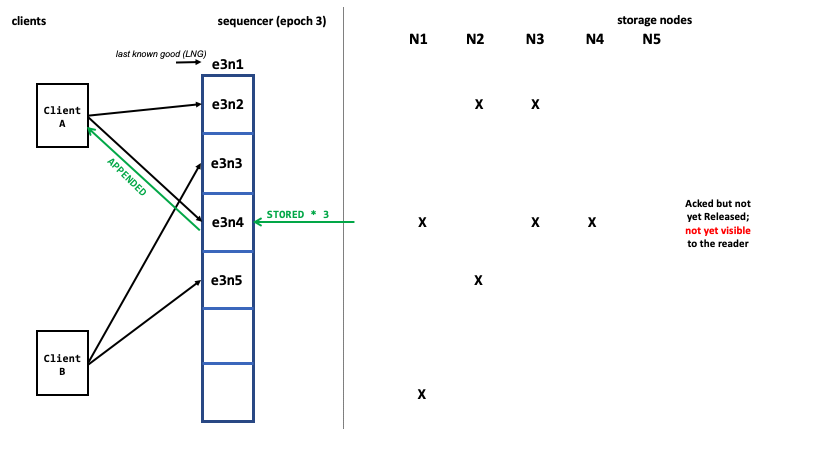 The sequencer releases records when both of these conditions are met:

The sequencer broadcasts two pointers: the “last known good” of the epoch, and the release pointer of the log.

You can see appends in action by watching this video:

Sticky copysets is a technique that efficiently groups records on storage nodes in large variable size blocks. If enabled, the appender uses one copyset for a large number of consecutive records in the same log, for as long as the writes to each node in the copyset successfully complete.

This feature can be controlled using the enable-sticky-copysets setting and via the sticky-copysetsattribute that is set in the log config file. See [settings.md#write-path] and [log_configuration.md#sticky-copysets].

Sequencers blacklist storage nodes that report that they are not able to accept records. They graylist nodes, meaning that they don't try to send them records for a while, if the nodes don't respond within a timeout.

The epoch store is a metadata component, stored in Zookeeper, that contains durable counters for each log. The epoch number is the upper 32 bits of the log sequence number (LSN) that the sequencer assigns to each record. Epoch numbers never regress.

The epoch number is incremented, or bumped, when a new sequencer is activated or reactivated. This occurs in the following situations:

Many clients can write to the same log. Records are written in sequence number order, i.e. the order they are received by the sequencer. If that is not sufficient ordering for the applications, then they can implement some out-of-band communication to add an ordering key to each record.

If you have a heterogeneous set of hardware, you can configure weights for storage and sequencer nodes in the node configuration. The weight values are used to balance APPENDs across sequencer nodes and STOREs across storage nodes.

Logs are assumed to have similar throughput, so a log with extremely high throughput can cause a bottleneck. To avoid issues, the writing application can balance the load by sharding its data, with each shard corresponding to a log. If sharding is already employed, the application should split the hot shard.

In the simplest case, each payload that the clients sends to the sequencer corresponds to one record. As an optimization, the application can use BufferedWriter to batch up writes. This is usually the preferred option.

The sequencer includes a very similar feature called SequencerBatching. SequencerBatching is beneficial if there are a large number of writers for a log (large write fan-in). When configured, multiple records from different clients that are all writing to the same log are batched and appended with one LSN. It may even batch records that have already been batched by BufferedWriter.

Both BufferedWriter and SequencerBatching compress data according to the batching and compression settings.

For more about the BufferedWriter API, go to Client library API.