One of the design principles for LogDevice is to maximize record placement options so as to increase write availability and handle spikes in the write rate. LogDevice uses non-deterministic record placement: each individual record may potentially be stored on any storage node in the cluster.

All of these placement options optimize for writing, but they complicate the read path for LogDevice. Client readers need to efficiently find and obtain the copies, and then deliver the records to the application in the correct order.

Both read availability and efficiency are important to LogDevice. Let's discuss how reads work, and how we make sure data is delivered reliably and efficiently.

This page has a number of topics: 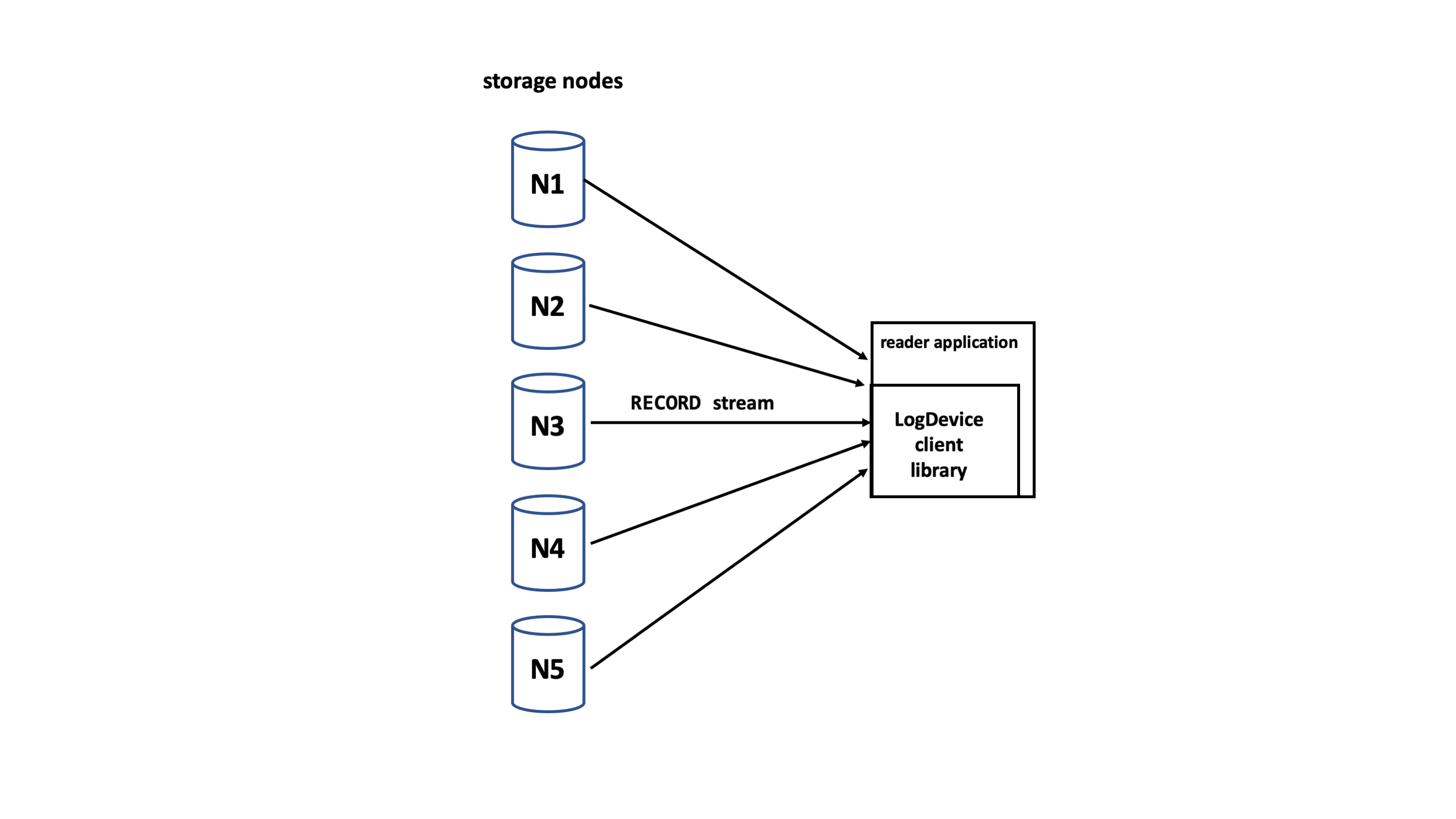 Although the client itself is complex, the API that you use to read records in sequential streams from your application is fairly straightforward.

You can learn more about how to use the reading API here.

The copyset is the set of storage nodes on which the copies of a particular record are stored. The copyset for each record is included in the header along with the log id, LSN, and timestamp when the record is written.

The copyset may be mutated:

The client reader gets the nodeset, which is the set of storage nodes that contain the data, and the replication property of the log from the metadata log. It opens a socket to each of the nodes and initiates a streaming protocol by sending it the start and until sequence numbers it wishes to read. Usually all of those nodes have records to deliver. 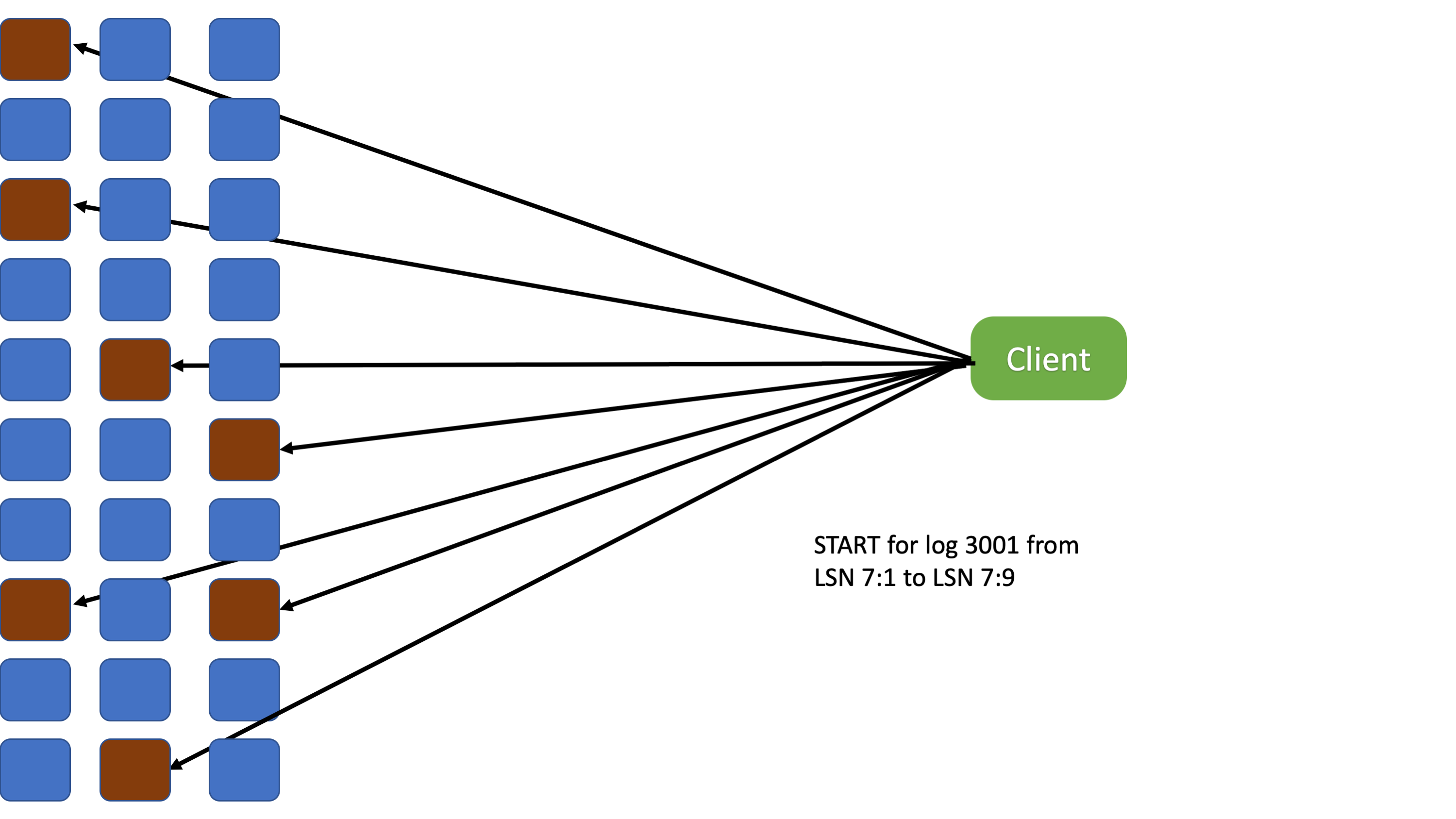 As discussed in Write path, storage nodes only deliver records that have been released by the sequencer, i.e., those with LSNs less than or equal to the release pointer.

Each server starts sending the records they have for the requested log ids. There is an implicit guarantee that each node sends its records in order. 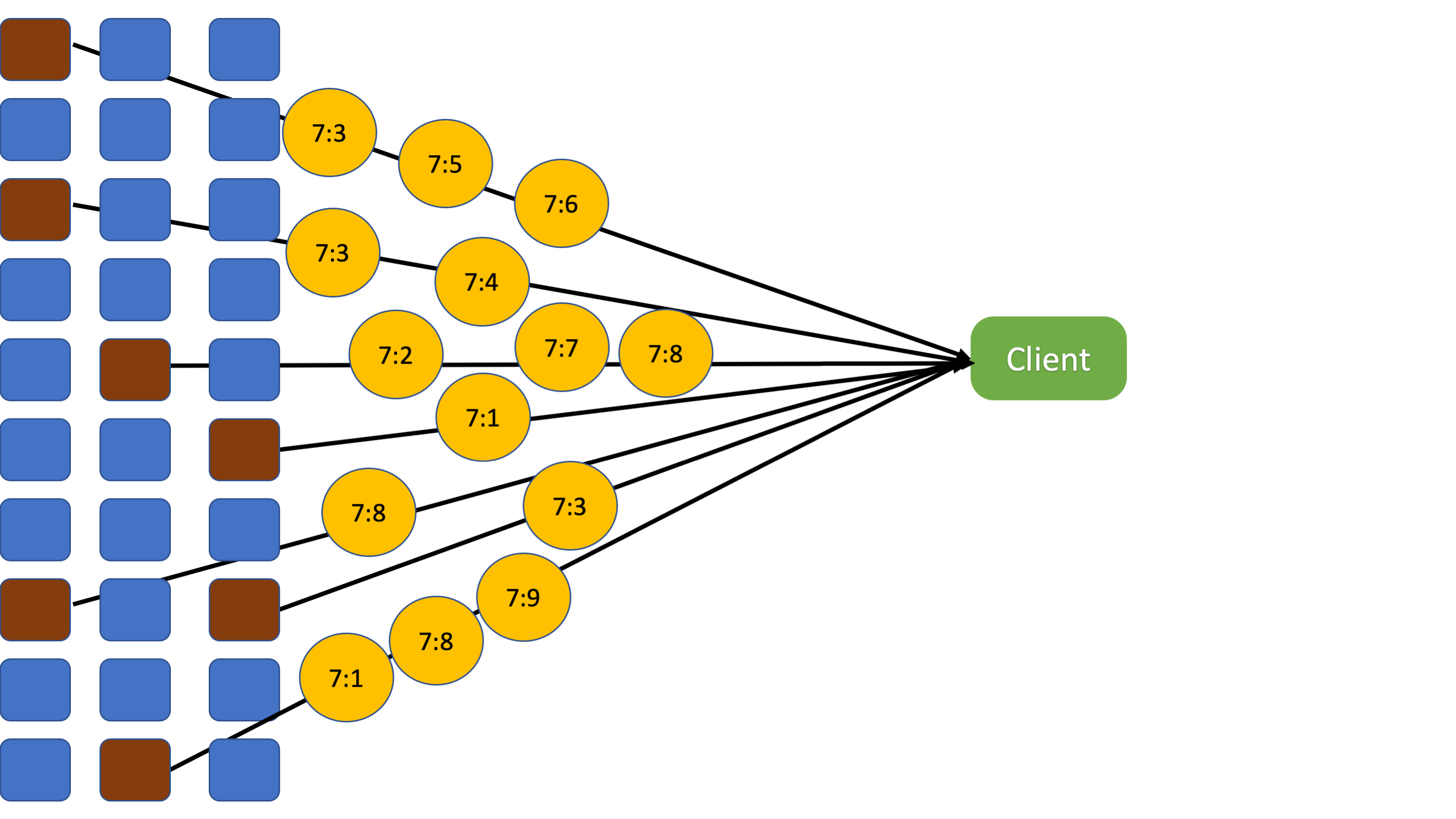 The client adds the records that it receives from the storage nodes to a buffer of configurable size. The buffer is used as a sliding window for these purposes: 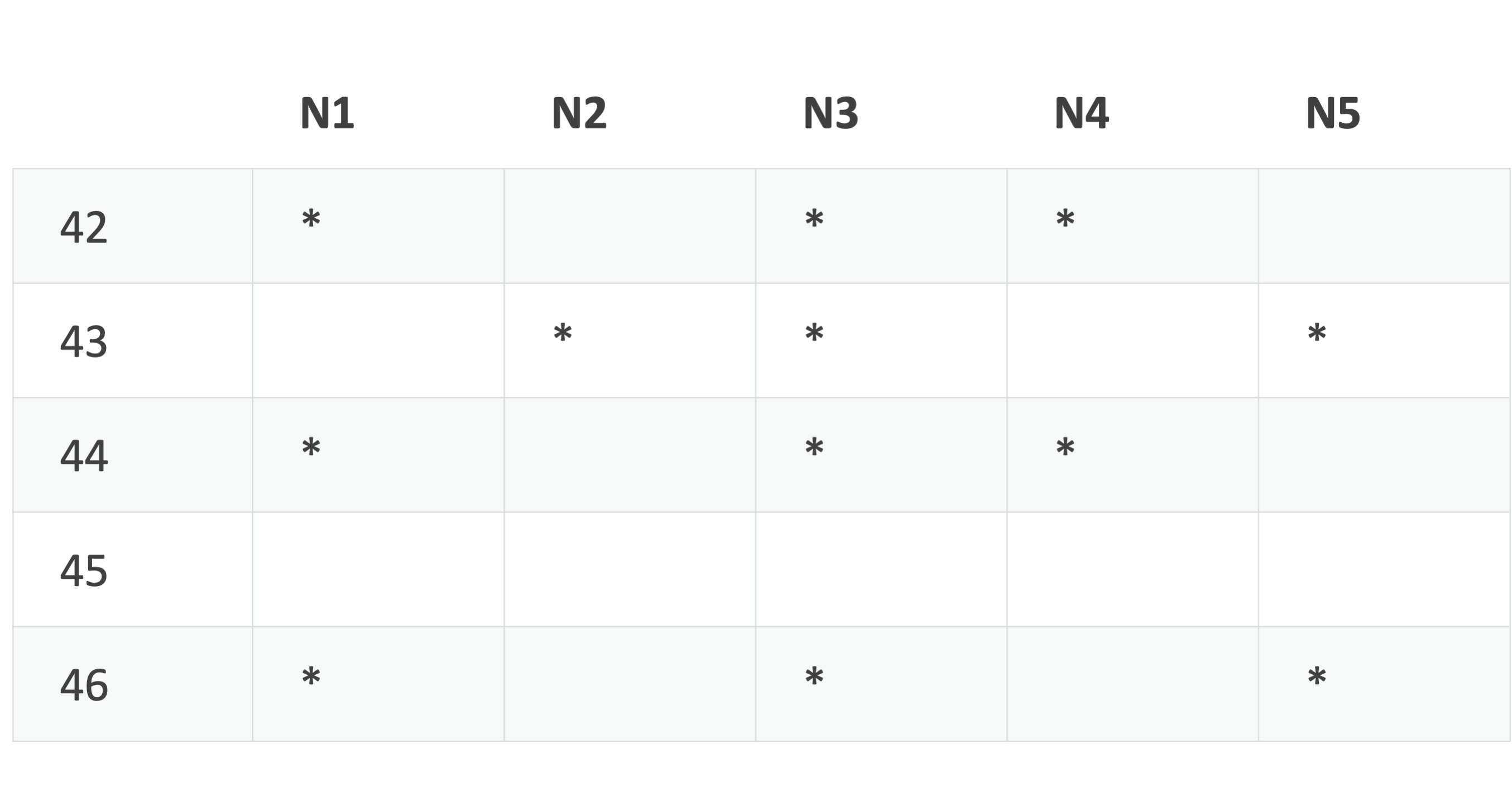 The table represents a client's window with 5 slots and nodes (N1..N5).

Most of the time, the stream of records received by the reader is made of continuous sequence numbers, but it's not always the case. Sometimes the reader needs to decide whether it must stall and wait for more record copies to be delivered to it by the nodes in the nodeset, or if it can correctly report a record as irretrievably lost and continue deliver subsequent records. This is encapsulated in the gap detection algorithm.

First, let's review the concept of f-majority, because this concept helps the client determine whether or not data is unavailable. The f-majority can be defined as a set of nodes that intersects every possible copyset. By definition, the complement of the f-majority cannot contain a copy set. Therefore, if the client has responses from an f-majority of nodes in the nodeset, it has enough information to say whether or not data is available for a particular record.

The gap detection algorithm says that a record for an LSN is considered non-existent if it’s not replicated according to replication constraints. If |nodeset|-R+1 storage nodes tell the reader that they never had a copy for that sequence number, there is no point in asking more storage nodes because there aren't enough of them in the nodeset to replicate the record.

If the client receives records that are larger than the "oldest" LSN that it's waiting for, and there is an f-majority of nodes responding for that LSN, the client declares that record as lost, issues a DATALOSS gap, and moves on. If the client has received older records and does not have an f-majority response, it stalls because it can't definitively say whether or not the record it's waiting for is available from the nodes.

In this example, where R is 3, and the nodeset size is 5, the reader is stalled because it has not received a copy for sequence number 52 and less than 3 nodes have said they don't have the record. There could still be a copy replicated on N1, N2, or N4.

If N1 sends a record with sequence number 54, the client can deduce that N1 does not have sequence number 52 (remember that records are delivered in order by the node). That's enough to conclude there must not be a record for that sequence number. The client issues a DATALOSS for 52 and rotates the buffer so that 53 is the lowest number.

Each node has an Authoritative Status that's recorded in the internal event log. Status values are:

Once we consider authoritativeness, the gap detection algorithm changes a bit. A data loss gap can be issued if:

For example, consider a nodeset with 7 nodes (N1..N7) and one of them, N5, is down. Rebuilding occurs, and everything that was stored on N5 is replicated onto other nodes in the nodeset. In this case:

The discussion so far assumes that storage nodes only send records. However, a storage node can send a gap message that explicitly indicates that it does not have records for a range of sequence numbers. Some of the cases when this happens:

Knowing that storage nodes also send gap messages, the rule for issuing a data loss gap to the application can be updated again. The client can issue a data loss gap if:

Reporting gaps to the application

The client reader reports both benign gaps and data loss to the application through the gap_out parameter of the read API. Benign gaps include bridge records and hole plugs:

We have added some optimizations to the read path to increase efficiency. These include compression, sticky copysets, copyset indices, and single copy delivery.

Payload data is compressed using zstd compression. The client expands the payload before passing it to the application.

In order to improve batching, the sequencer may continue to use the same copyset for a large number of consecutive records in the log, as long as the writes on the copyset successfully complete. This technique is called sticky copysets. It effectively groups records on storage nodes in large variable size blocks.

As another optimization, each storage node maintains a copyset index that contains the LSN of each record stored on the node and its copyset. The index is updated as new records arrive and old records are trimmed.

The storage nodes leverage the copyset index to efficiently filter each record. When the index is combined with sticky copysets, where same copyset is used for multi-megabyte blocks of consecutive records, efficiency goes way up: the filtering decision applies to a whole block which is either read and delivered, or skipped.

To avoid reading and sending each record multiple times, single copy delivery (SCD) provides a consistent way of selecting one node in the copyset to read and deliver a copy of each record.

There are a couple of variations:

For the other two modes, see scd-copyset-reordering-max in Configuration settings.

Clients start reading from a storage node by sending a START message to the nodes in the nodeset. In this message, the flag SINGLE_COPY_DELIVERY defines if the created read stream uses SCD. If the flag is set, the START message also contains a list of nodes — the "known down list" — that are considered down by the client.

The storage nodes take the copyset for the record, remove any entries from the known down list, and then apply the shuffle algorithm to figure out which node should send the next record.

Usually a storage node is added to the known down list because the client couldn't connect to it or initiate the streaming protocol because the node is down or underreplicated. If a node has lost its data or can't deliver records for some other reason, it'll tell the client during the handshake.

A stream is "rewound" if the client decides to send another START with a start_lsn smaller or equal to the read pointer of that stream. The client rewinds the stream when it modifies the known down list or when it switches between SCD and non-SCD mode.

All Send All (non-SCD) mode

If a client detects a gap while reading in SCD mode, then it:

Performing a rewind causes read amplification, but because nodes don't fail often, in practice it doesn't affect overall performance. As long as no more than R-1 nodes are unavailable, read availability is guaranteed.

The next time the client slides the window, it switches back to SCD mode.

By default, the client never delivers a data loss gap to the application while in SCD mode. Each time there is a possible data loss, it switches to all send all mode.

Although the read path, as described thus far, is very resilient to node failures (server crashed, power loss, disk failed, loss of network connectivity), it's less resilient to «grey» failures, i.e., nodes running in a degraded state. When single copy delivery is enabled, there's nothing to prevent the slowest node in the log's nodeset being the one sending out the records.

So we added a failure detector to the client to make it resilient to grey failures.

The failure detector keeps track of how long it takes for each storage node to complete the client's read window. The client slides the window when the read pointer is past X% of the current window, where X is defined by the setting client-read-flow-control-threshold. As nodes complete windows, the latency samples are added to a bucketed time series and a moving average per node is calculated.

Nodes that are observed to be much slower than their peers are put in the known down list. They are reinstated after a probation period and measured again. Depending on their performance, they are re-added to the known down list for either increasingly longer or shorter time periods.