When a node that has the sequencer role becomes unavailable due to a system crash, network partition or other event, the recovery process starts. There are two main components:

When a sequencer running on a node becomes unavailable, the failure or partition is detected and propagated by the failure detectors that are running on the other nodes. The append for the log is routed to a healthy node and it activates a sequencer.

When the sequencer activates, it requests an epoch number from the epoch store. It can immediately start taking appends in the new epoch so that there is minimal disruption in write availability, usually less than a second.

The sequencer can't release these records for delivery to log readers immediately. This is because records near the tail of the previous epoch, corresponding to in-flight appends at the time of the sequencer failure, might be left with an inconsistent state on storage nodes. Delivering these records as-is would violate LogDevice's repeatable read consistency guarantee.

Instead, the new sequencer starts log recovery. It repairs the sequence of records for the previous epoch into a consistent and immutable state on storage nodes. As soon as log recovery is completed, the sequencer advances the accumulative release pointer of the log to the “last known good” LSN in its current epoch. This allows all records up to the release pointer be delivered to existing readers with repeatable read guarantees.

The goal of log recovery is to achieve durability, consistency, and immutability for the strand of records up to the end of epoch affected by the sequencer failure. More specifically, for a successfully recovered epoch:

A bridge record is stored by the log recovery procedure at the end of a recovered epoch. It is a regular log record but with a special internal type. Its sequence number represents the consensus about where the epoch ends that was reached by nodes that participated in the recovery. It tells readers to advance the epoch through a benign bridge gap (i.e., no data loss).

Let's look at an example of a sequencer failure and recovery.

Here we have a normal state: the sequencer is writing to 5 storage nodes (N1-N5), with only one record (e5n6) ACKed since the last known good LSN. The replication factor is 3, and some records have not been fully replicated yet. 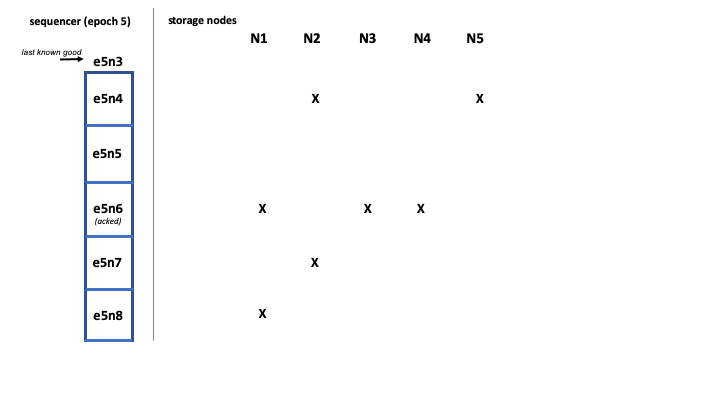 Both the sequencer and storage node N1 go down. 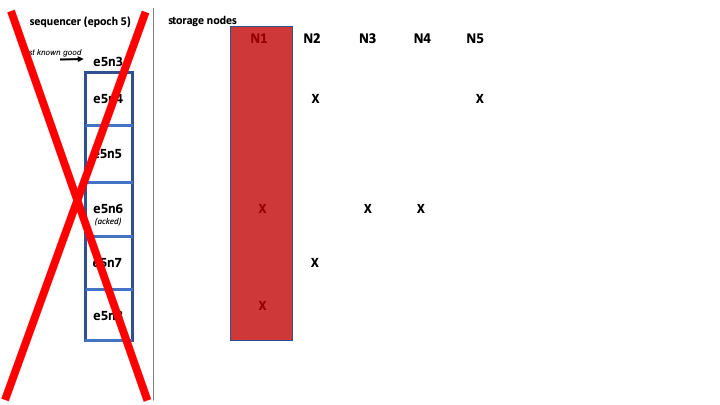 A new sequencer activates and immediately starts taking appends in the new epoch e6, but it can't advance the last known good pointer for the log just yet. Updating the pointer at this time could pose some problems: 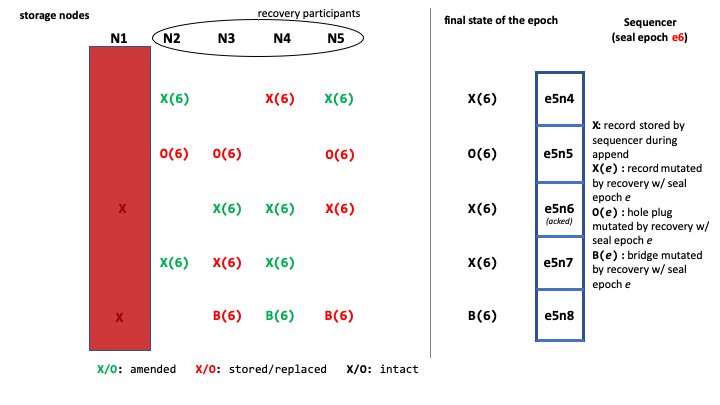 Final state after recovery is complete 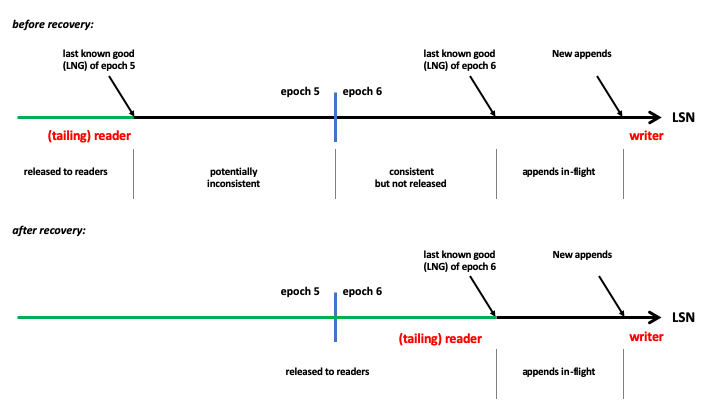